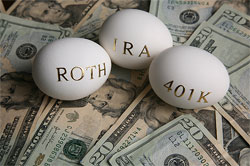 There are new updates made to the Roth Solo 401 k regulations which have taken effect in 2013. The most recent improvements to this retirement plan provide more reasons and support to the practicality of in-plan conversion to Roth Individual 401k accounts. Financial experts at Sense Financial Services LLC recommend this retirement plan because of the tax efficiency and benefits it offers.

What the new rules offer

There are various changes and modifications in adherence to the American Taxpayer Relief Act which was regulated in 2012. It basically allows the conversion of all individual 401k accounts to Roth Solo 401 k plans. In the previous years before the new Roth 401 k rules, the following funds are exclusively converted:

With the new Roth Solo 401 k regulations, the following funds are already covered and qualified for conversion:

There are however amounts which are derived from a pretax Solo 401 k that still do not qualify for conversion to a Roth 401 k plan. The following are considered non-eligible distribution amounts from the Solo 401 k:

There are various upsides and benefits when converting Roth 401k plan. For instance, there is no more application of the early distribution withdrawal penalty with 10% payable amount. This is applicable even for account holders under 59 ½ years. However, there are compliance notes which must be considered and observed. The updated Roth 401k rules also state that for the converted amounts to individual Roth 401k plans which are distributed prior to the five year waiting period, the 10% early withdrawal distribution penalty is applied. The re-conversion of the Roth Solo 401 k plan is also not allowed, unlike the traditional IRA plan. Plan holders who want to convert their plan must be 100% sure that this is what they want since they cannot modify or re-convert if they change their mind. It’s always good to seek financial expertise when it comes to your retirement.

This content was put together as a collaboration of multiple sources and employees of Sense Financial.